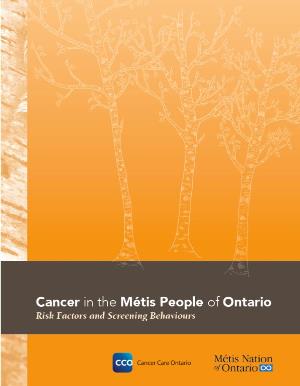 TORONTO, ON (July 29, 2015) – A new report developed jointly by Cancer Care Ontario and the Métis Nation of Ontario shows that within the Métis population in Ontario, cancer risk factors are significantly higher when compared with the non-Aboriginal provincial population. The report, Cancer in the Métis People of Ontario: Risk Factors and Screening Behaviours, identifies key factors that impact cancer rates in the Métis population and provides recommendations for cancer prevention and risk reduction.

Although almost one third of all Aboriginal people in Canada are Métis, they are often under-identified or under-represented in Indigenous health research and statistics. To address this gap, Cancer Care Ontario and the Métis Nation of Ontario worked collaboratively to produce the report, which provides Métis-specific data and knowledge that will be used to inform policy and program development to reduce the risk of cancer amongst Métis populations and to reduce health inequities in this at risk population.

“By working in partnership with Cancer Care Ontario, we were able to bring together data from multiple sources to increase our knowledge of key cancer risks factors in our communities,” said Gary Lipinski, President of the Métis Nation of Ontario. “Most importantly, it will help us target valuable health resources to where they will be most effective in bringing about measurable improvements in the health and well-being of the Métis people of Ontario.”

The report is aligned with Cancer Care Ontario’s Aboriginal Cancer Strategy II, which highlights research and surveillance as a strategic priority. It is also in line with Métis Nation of Ontario’s commitment to developing our understanding of key health risk factors and reasons for health disparities in the Métis Nation.

“The data in this report and other evidence demonstrate that the Métis community would benefit from culture-based programming that supports and encourages healthy behaviour and lifestyle changes to reduce cancer risk, and from interventions that educate and help raise awareness of the broader risk factors for cancer,” said Dr. Loraine Marrett, Senior Scientist, Cancer Care Ontario.

Dr. Marrett added: “Métis-specific interventions that are wholistic and which target multiple risk factors, such as smoking and alcohol consumption, may be required to effectively reduce cancer risk. Family-based interventions that are framed within the very community and family-centred Métis way of life are also those which will be most to likely resonate with the Métis people.”

Recommendations outlined within the report target risk factors that impact not only cancer, but also other serious chronic diseases, such as diabetes, respiratory disease and cardiovascular disease that are known to be higher in the Métis people of Ontario. They include:

The full report is available here. To view the Backgrounder click here.

Determine your personal risk of cancer by visiting mycanceriq.ca.

Click here to contact a Patient Navigator who can help Métis and other Aboriginal cancer patients and their families.