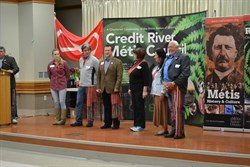 Participants on stage at the 2014 Louis Riel Day
celebration in Brampton.

November 16, 2014 marked the third consecutive year that the Métis Nation of Ontario (MNO) Credit River Métis Council (CRMC) was host to a full afternoon gathering of almost 150 MNO citizens, family, friends and MNO CRMC partners to celebrate Louis Riel Day. It was clear that this year’s celebration would be the best one yet!

MNO staff members were present with displays that informed guests on MNO healing and wellness, employment and training, and community services.

Jim Tolles, MNO CRMC Traditional Knowledge Resource, created an expansive traditional and cultural Métis display for participants to stop in and view. Another booth was set up by Hydro One Brampton, which offered energy tips and conservation information. There was also a bake table and a crafts table.

Senator Bergie opened the afternoon festivities with a prayer. President Cuddy provided opening remarks explaining, “Some say it is ironic that our communities gather and celebrate on the anniversary of Louis Riel`s execution on November 16, 1885. What they fail to understand is that without this most selfless, ultimate sacrifice, this gathering today would not be possible. The Métis will never again be ignored, forced underground or forgotten and we celebrate this across the homeland. By doing so, we honour Louis Riel and his legacy by affirming our inherit rights as Métis.”

President Cuddy directed special attention to Ethier who was responsible for the planning, execution and success of the day’s celebration. It was clear to all how hard she must have worked to put together the gathering. Rochelle was thanked with an enthusiastic round of applause.

The event could also not have been possible without the help of a large group of volunteers, including: former MNO CRMC Councillor Darlene Lent; MNO CRMC Women’s Representative, Wendy Elliott; former Councillor, David Neville; Councillor Karen Derocher; Councillor Jean Marc Maheu; Youth Representative, Samantha Cuddy; Angela Cuddy; Helen Barron; Janice Graham; Shonna Ethier; Trevor McLellan; Charlene Hally; Michele Kwan; Karen Stewart; Jenna Topolie; Katherine English; Lori Henderson; Brooke Henderson; and Amanda Lenneard. President Cuddy would like to give his apologies should anyone have been omitted. Everyone who helped to make the event a success should be commended for such a wonderful job.

Next were presentations for Senator Bergie and former Councillor, Neville, who unfortunately will not be part of the MNO CRMC starting in December 2014. Former Councillor Neville was always willing to lend a hand and even stepped up to the challenge of MNO CRMC Acting Chair while handling the Education portfolio. His work with the Halton School Board was instrumental in having the Métis flag raised at Milton District High School on November 13, 2014. Former Councillor Neville’s tireless contributions to the MNO CRMC will be sorely missed.

Senator Bergie has been our longest serving Councillor to date and has always guided the MNO CRMC with humour, integrity and dignity. President Cuddy acknowledged that this was his hardest presentation of the day, because “I’m not only saying goodbye to the only Senator I’ve ever served with, but to my highly respected colleague and friend whom I will dearly miss. Senator Bergie’s departure will leave a hole in our community and representation not easily filled.” President Cuddy continued, “We extend our best wishes for David and Ray for the future and sincerely thank them for preforming above and beyond the call of duty as Councillors serving the MNO CRMC Citizens.”

Joe Paquette, President of the MNO Veterans’ Council (VC), was next called to the stage. President Cuddy explained how “the MNO CRMC recognizes the importance of our Veteran’s not just in our community but to our Nation. Like Riel, their selfless sacrifices are a big part of why we are able to gather today. The MNO CRMC would like to take this opportunity to announce that the proceeds for today`s 50-50 draw will be donated to the MNO VC. When you purchase these tickets you are supporting our Veterans.”

Hydro One Brampton representatives, Karen McCarthy and Scott Miller, were next to the stage and presented a cheque for $500.00 to the MNO CRMC as a donation of support for the Louis Riel Day Gathering. The cheque was graciously accepted by President Cuddy, who added, “The MNO CRMC are grateful for the support that helped to make this community gathering possible. We will continue to build a relationship beneficial to MNO CRMC citizens and Hydro One Brampton.”

Petrick presented a cheque for $2000.00 to the MNO CRMC on behalf of the PDSB as a donation of support for the Louis Riel Day Gathering. The cheque was accepted by President Cuddy on behalf of the MNO CRMC. President Cuddy explained how “the MNO CRMC is extremely grateful for this donation. We recognize the PDSB as one of the most progressive school boards in Ontario. With successful projects such as the Self-ID policy as a foundation, our partnership will surely deliver more valuable projects and programs in the future that are advantageous not just to MNO students in the Peel District, but to all of the students and teachers in Peel.”

The last presentation on the agenda was from the Ontario Trillium Fund (OTF). Jaz Singh, OTF volunteer, introduced local MPP-Brampton West, Vic Dhillon, to the stage who announced a $102,000 grant to the MNO CRMC. MPP Dhillon spoke about the impacts from the recent OTF supported programs offered by the MNO CRMC. “The three-year grant was made in October 2013 and is being used to help with the salary for a part-time Community Outreach Worker who has created new training opportunities for volunteers, developed workshops and school presentations, and coordinated various events in the Orangeville, Halton, and Peel Regions. Funds from the grant are also being used to help with the costs for producing MNO education kits, promotions and office equipment.”

President Cuddy accepted the OTF plaque on behalf of the MNO CRMC. President Cuddy thanked MPP Dhillon and Singh by presenting them both with a copy of the MNO book entitled, Values and Traditions of our Ancestors.

This year’s festivities focused on entertainment and included the following lineup: a ladies drumming circle; Auriele Diotte from Oshawa who delivered an amazing jigging demonstration and a workshop that culminated in an impromptu performance by the workshop participants; and the Métis fiddle duo, Kim and Rajan Anderson—a crowd favourite who played fiddle music up to the traditional feast. Couples were on the dance floor in no time and youth and elders joined in on some of the songs with the spoons. All of the musicians put on a spectacular performance that continued through dinner and finished just in time for the announcement of raffles and draws.

No sooner had President Cuddy returned home, did the MNO CRMC begin to get feedback from the event. “Great Louis Riel Day celebration! Rochelle and colleagues did a super job” wrote Rob and Bon H.

Barb W. also wrote in and said, “Thank you so much for a great day at the Louis Riel celebration. The drumming, music, food, booths, draws—it was all really nice. [. . .] it is fantastic to know that you work closely with them [PDSB] and that you are spreading the word about Métis culture. The work that you and the MNO CRMC do is very important. Please let all of the volunteers, the MNO CRMC, Elders, Rochelle and the sponsors know that all of their work was really appreciated. Again, thank you.”